Brunel was a big fan of boats. And the Bard.

S​​​​​​tored away amongst his memorabilia, the hilarious Natural Theatre Company has (ahem...) 'unearthed' an early work written when Will was just a young whippersnapper. This unpublished play features early sketches of his most iconic characters, first drafts of famous scenes ... and just a little bit of nonsense.

Shakespeare Undone! takes you on a theatriceal journey through the nooks and crannies of the SS Great Britain, where the best bits of Shakespeare will come to life around you!

This event is part of Bristol Shakespeare Festival.

About the company
The Natural Theatre Company have been making people laugh for over 45 years. An award-winning street theatre company, they produce delightfully comic, charmingly absurd performances guaranteed to bring a smile to everyone's face. The Naturals have been a favourite at many established events including Glastonbury, Ascot, and the Olympic and Paralympic games, as well as regularly performing across the globe in Venice, Australia, Paris and the FI Abu Dhabi Grand Prix. 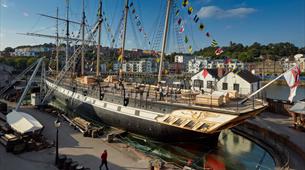