You are here: Home > What's On > Easter Holidays at Aerospace Bristol Join Aerospace this Easter for some special events: Celebrate the 50th anniversary of the first Concorde flight, witness a public showing of the Concorde's droop nose, meet pilot Tim Orchard or celebrate the Aplha Foxtrot's 40th anniversary with a special tour.

9th April
This year marks 50 years since Concorde’s maiden flight - from Toulouse on 2nd March 1969, with the first British flight taking place from Filton on 9th April 1969 - and Aerospace Bristol will be celebrating this incredible milestone with some special activities. So don’t miss your chance to join the celebrations and step aboard the last Concorde ever to fly, in Concorde’s fiftieth anniversary year.

Aerospace will have Concorde Captain Colin Morris meeting visitors and signing autographs, plus there will be special talks and archive footage playing in the theatre. Included with museum admission.

13th April
​​​Concorde's droop nose was designed to give pilots better visibility during takeoff and landing. The droop nose of Concorde Alpha Foxtrot has not operated since the final flight on November 2003. To celebrate Concorde50, Aerospace's conservation team and volunteers have been working on an exciting project to get it moving again for the first time in over 15 years, and you could be here to see it.

Visit Aerospace Bristol on Saturday 13th April for the first public showing of the droop nose. You will be able to enjoy a talk and see the nose lowered and raised at 11am and 1pm. Included with museum admission.

16th April
A talk on the life of a Concorde pilot, by Captain Tim Orchard. Tim Orchard began his flying career 47 years ago. He has flown over 50 types of aircraft and is currently licenced to fly aeroplanes, helicopters, hot air balloons and hot air airships. He jointly holds the Concorde World Record time for the journey from New York to London: 2hrs 52 minutes (7th February 1996).

Tickets cost £5 on top of museum admission – available to book in advance or buy on the day if not sold out.

20th April
Celebrate the 40th anniversary of Alpha Foxtrot’s maiden flight with a special tour detailing the history of Concorde. Tours are £5 per person on top of museum admission and are bookable on the day at admissions. 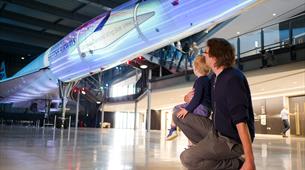