You are here: Home > What's On > Guest chef evenings at The Pony & Trap 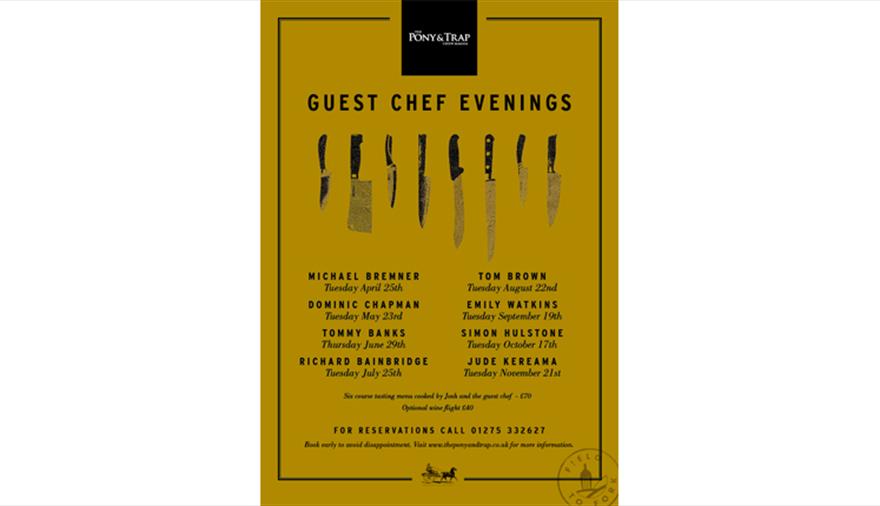 The Pony & Trap is to welcome some of the UK's most talented chefs, teaming up with Josh Eggleton at a series of unique events to co-curate six-course tasting menus, each being offered for one night only.

The first guest chef night will be held on Tuesday 25 April, featuring Michael Bremner. The Brighton-based Great British Menu Finalist is renowned along the South Coast, with his restaurant 64 Degrees recently being named the best restaurant in the city.

Fellow Great British Menu contestant Dominic Chapman will take the following guest spot on 23 May after a fantastic start to the year as his White Waltham based pub The Beehive was placed 7th in the Top 50 Gastropubs in the UK.

On Thursday 29 June Great British Menu 2016 finalist and keen forager/farmer Tommy Banks will trade the North Yorkshire Moors for the rolling hills of the Chew Valley as he makes the trip to the South West from his Michelin starred restaurant The Black Swan in Oldstead, North Yorkshire. The young chef wowed judges, diners and viewers alike with his record breaking run on the 2016 series.

Richard Bainbridge follows shortly after as the chef-owner of the Norwich based Benedict’s heads to The Pony & Trap on Tuesday 25 July. Bainbridge, who stunned Great British Menu viewers in 2014 with his family inspired dishes, launched Benedict’s, his first solo restaurant, in 2015.

On 22 August, Tom Brown, Head Chef at Michelin starred Outlaw’s at The Capital, takes the guest spot. The Cornwall local has been working with seafood for years now and it came as no surprise when he was named head chef under one of the country’s most renowned seafood chefs.

Emily Watkins will then head to The Pony & Trap on 19 September. The chef-proprietor of The Kingham Plough in Oxfordshire first cut her teeth in Florence before moving back to the UK to work under Heston Blumenthal at the Fat Duck in Bray.

As the autumn season gets into full swing, chef-proprietor of The Elephant in Torquay, Simon Hulstone will be joining Josh on the pass on 17 October. The Elephant restaurant has held three AA rosettes since 2005 and in 2006 Simon and his team won Torquay its first Michelin Star, which it maintains to this day.

Last but not least is Josh’s Great British Menu South West compatriot Jude Kereama, who heads to The Pony & Trap on 21 November. The New Zealand native and his wife Jane own the Porthleven based restaurant Kota, which means shellfish in Maori, offering diners an exciting blend of Jude’s Maori and Chinese Malay heritage.

For further information about each of the guest chef nights or to book please visit The Pony & Trap website www.theponyandtrap.co.uk or call 01275 332 627.