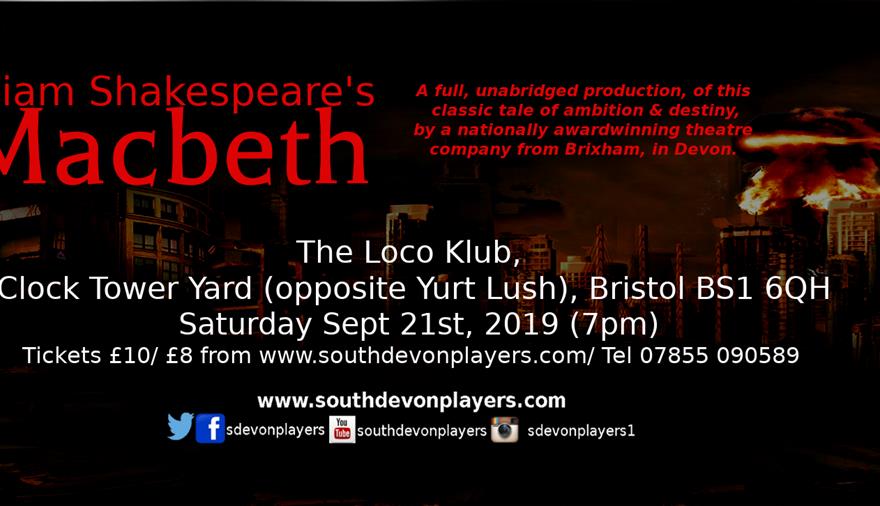 "Macbeth" tells the tale of a Scottish war hero, who, tempted by ambition, power, and supernatural whisperings, begins a series of murders, to take and hold the throne. Returning home from war, Macbeth encounters three mysterious women, whose prophecy of kingship, sets in motion his ambition, and ultimately his fall into madness and blood...

The Players perform the original, uncut Shakespearian text, set in the dark aftermath of a nuclear WW3, in a post-apocalyptic design, with the exotic of the supernatural, and immersive soundscapes, to create Macbeths world in a new vision of the drama.

This performance takes place in a new arts venue built into old railway tunnels, and will be a very intense, immersive experience!
The venue does have a licenced bar for the interval.

Performing William Shakespeare's original unabridged text, the award-winning South Devon Players Theatre & Film Company, homegrown in Brixham, bring this drama to life in an all-new production. This show was performed in Jan/ Feb 2019 around Devon, to five star reviews and has won a theatre award in New York.

Winners of the 2017 Epic Award for England, an annual national award for groundbreaking innovation and creativity in the arts, and now the Theatre Partner award in the 2019 Long Island Theatre Awards, the South Devon Players specialise in high-quality productions based on classical texts, and researched history, developing and showcasing the talent of actors and other creatives from around South Devon.

The performance in Bristol will take place on Saturday Sept 21st 2019, beginning at 7pm, at The Loco Klub.

This performance is part of the Bristol Shakespeare Festival