You are here: Home > What's On > Valley Fest 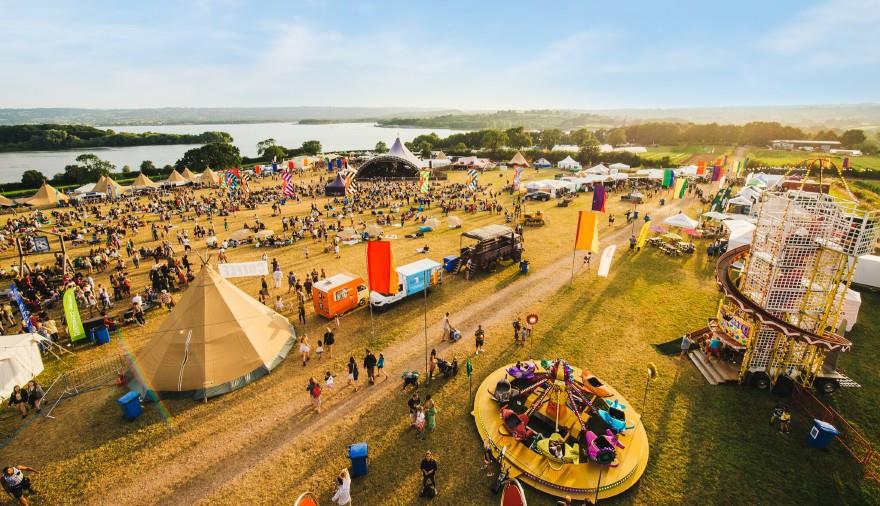 Valley Fest, the best-tasting music festival in the South West, has announced its 2021 line up. Texas, Sophie Ellis-Bextor and Deacon Blue will headline. The music festival takes place alongside Chew Valley Lake, near Bristol, between 30 July – 1 August 2021.

Texas will now headline Friday. Perfectly placed to get the festival off to a flying start, the band have sold more than 40 million albums worldwide in their thirty-year career. Valley Fest is one of the very few opportunities to see them play this year. On the back of a hugely successful career - Texas has a new album out: Hi which will be their 10th album. The previous one, Jump On Board, released in 2017 - debuted in the top 10 in most countries in Europe.  They have had thirteen top-ten singles on the UK Singles Chart, three number one albums and eight UK top ten albums on the UK Albums Chart, as well as being an Ivor Novello award winner.

Sophie Ellis-Bextor. Many of you may have taken part in her Kitchen Discos, performed at home during lockdown with her five sons and recorded by her husband, musician Richard Jones. They were watched and enjoyed by 40 million around the world. And now we get her on our land!

Deacon Blue are one of Scotland’s best loved and most successful bands. With fourteen hit singles, over seven million album sales and two number one albums, they’ve enjoyed success from debut album ‘Raintown’ right through to 2020’s ‘City of Love’. Now, over thirty years into their career, they headline The Lake Stage on Sunday. Long praised for their live performances, expect hands aloft sing-a-longs to the soaring vocals of Ricky Ross and Lorraine McIntosh.

You’re advised to arrive hungry! Showcasing the best of the South West’s glorious produce you can take advantage of sit down feasts or a bbq in a box.

Valley Fest, now in its seventh year has a track record of huge headliners, firm favourites and rising stars and this year is no different. The Cubans Brothers blend sexy, soulful music, with jaw-dropping b-boy action and outrageous comedy. The Blockheads - rarely off the road since the demise of Ian Dury in 2000, but now with Derek Hussey fronting the band, they are still one of the most underrated British bands of all time.

Back at Valley Fest for the third time by extreme popular demand: MY BABY. Their roots-driven hypnotic dance music has cast a formidable spell on the world. Expect the rawness of seventies funk mixed with blues, gospel and big builds. Eva Lazarus returns, described as “having the soulfulness of Amy Winehouse and the modern Reggae chops of Damien Marley; the flair of the strongest rock band – the sexiness of the most impassioned Jazz singer.” Not to be missed.

The fabulously original phenomenon that is Oh My God! It’s the Church is a new musical religion for the 21st Century. One which brings the masses together and baptises them in Absinthe.  Junior Jungle are also back, these family favourites are sure to serve up some big boss tunes, perfect for little and large people. Rocking their wacky, original sound Doreen Doreen, are Bristol’s best loved covers band, expect musical mash-ups, magnificently melded into moments of majesty and mayhem!

Toploader, are on the bill. Best known for ‘Dancing In The Moon light’ and their album 'Onka's Big Moka’, which sold over two million copies and remained in the Top 5 of the UK album chart for over six months. Beans on Toast - a cult figure who tells it like it is. He’s a hippy, a punk, a poet, a drunk, a die-hard romantic and an eternal optimist. He sings simple songs that tackle big issues.

The Egg play live rocktronic, funk and house inspired big textural dance music.  Their audiovisual show draws its sonic inspiration from bands the likes of Pink Floyd, New Order, Underworld and Air and have a cult following to boot.

Hailing from France, Old School Funky Family have more saxophones than you can shake a stick at.  They bring warnings of relentless rhythms and original arrangements. The wildly charismatic singer of The Correspondents, Mr Bruce is moving in a new direction. Be one of the first to see it (bragging rights are part of the ticket price!) Worm Disco Club bring the best in global sounds, groove-laden goodness, percussive madness, jazz, psych and beyond.

Loup GarouX are definitely one to watch. This band features the Mercury Prize-nominated solo artist and producer Ed Harcourt, Richard Jones of The Feeling, and Gorillaz / Senseless Things drummer Cass Browne. For some post-punk rawness and operatic singing check out Nuala Honan and for instrumental dream pop and electronica it’s Haiku Salut. Songsmith and former Sunday Times ‘Breaking Act’ Sam Brookes is still one of the UK alt-folk’s best kept secrets, so check him out. Abbie Ozard who is taking BBC6 by storm; The Snuts – who have a slew of floor-stomping hits are not to be missed; Snazzback whose cinematic future-jazz sound deftly blends afrobeat, hip-hop and electronica and finally ICHI described as “brilliant and bonkers” by Lauren Lavern.

Part of Valley Fest’s appeal is the lazy lakeside vibe.  And artists which perfectly cater to that include  Old Sea Legs and Talisk. For acoustic, afternoon vibes, then look no further than spellbinding blues singer Elles Bailey and powerful songstress Katey Brooks. Pete Josef takes us on a warm trip that crosses continents and brings down barriers.  The long-time Roni Size collaborator has enjoyed support from Gilles Peterson and has won fans worldwide for his diverse brand of soul-tinged, groove-heavy songwriting.  His long-awaited second album is due October 2020, as well as new upcoming singles with lo-fi house duo The White Lamp, featuring Underworld’s Darren Emerson.  His live powerhouse features some of the best of Bristol and London talent.

Valley Fest is West Country wildness at its best.

Tickets:
£175 (plus booking fee) and can be bought in instalments to spread the payment from www.valleyfest.co.uk. Ticket prices will increase to £195 in July.