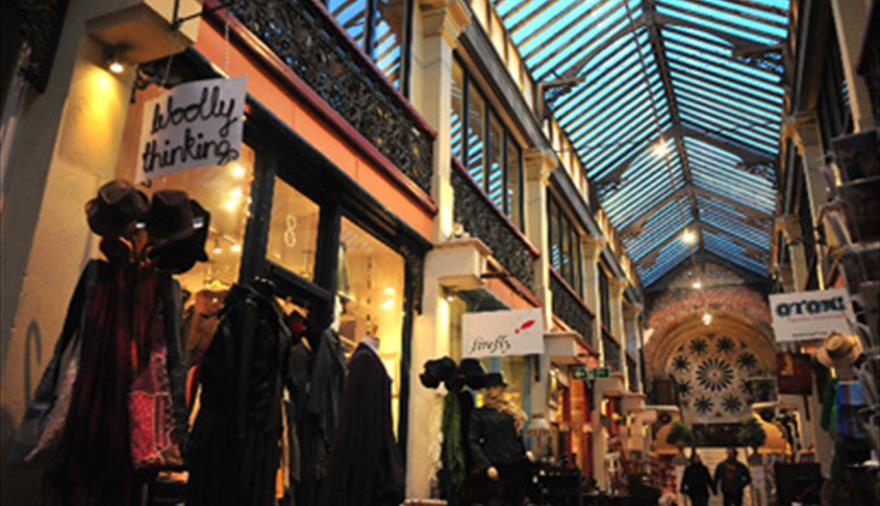 This unique and beautiful Victorian shopping arcade houses some of the most unusual shopping in Bristol. Originally opened in 1878, it later fell into disuse but has recently been restored and now houses a community of small shops selling a huge variety of desirable items from the affordable to the wildly extravagant. From antiques, furniture and jewellery to designer clothes, contemporary interiors and art, (not to forget the books and music!), there really is something for everyone in the Clifton Arcade. And to round it off the popular Primrose Cafe offers a relaxed atmosphere with freshly prepared food available all day.

Built between 1876 and 1878 by Joseph King, a self-taught architect, entrepreneur and builder, it was a Victorian version of the shopping mall. In 1873 he had built a row of Italianate shops in Whiteladies Road - occupied by the Alexandra - and a few houses such as Richmond Buildings, and 13-15 Clifton Road. He now felt able to embark on a much more ambitious project.

His grand scheme for Boyce's Avenue was two separate buildings, the shopping arcade itself, in King's Road and at right angles to it, in Boyce's Avenue, a reception and entrance way to the arcade, with a space in the middle for carriages to drive inside the complex. (A single storey shop has been built in the gap, and the rest of the spaces in the street were later in filled) In front of his arcade was a pleasure ground matching the one already laid out in the front of Boyce's Buildings.

King's Clifton Bazaar and Winter Garden opened on April 7th, 1879. It was an instant flop - it became known as King's Folly. King had hoped to let spaces in his arcade and act as manager of the enterprise, however there were no takers and he went bankrupt.

By December 1879 the property was eventually sold and became The Wilsonia Depot, selling magnetic belts, corsets, vests, spine bands and gloves advertised: "Take medicine and Die - Apply Magnetic Currents and Live." This venture also failed and The Wilsonia Depot sold out in January 1880 to Knee Brothers who needed a warehouse for their furniture storage business.

Following the death of Edward Knee in 1985 at the age of 92, the whole arcade was found to be unsafe having largely been untouched since its original construction. Repair work started in 1989 and some 60 tonnes of debris had to be removed, including a caravan!

The building has been used as a film location, notably in the BBC drama Little Sir Nicholas, De Amitri’s video “Nothing Much Happens Here” and on more than one occasion by the BBC for Casualty.

The present owners Moorpoint Ltd acquired the arcade and undertook the restoration of those parts of the building that could be saved. By this time the roof had been covered in slate and the weight had literally broken the back of the building. Kings Road had been scaffolded for so long that there was a real danger that it would collapse when the scaffolding was removed! However, by 1998 the terrace had been rebuilt in the similar Bristol Venetian style as the original, and the Hop House Pub opened its doors for the first time.

The Clifton Arcade was finally open the way Joseph King had envisioned - some 115 years late!