You are here: Home > Things To Do > Banksy Walking Tour 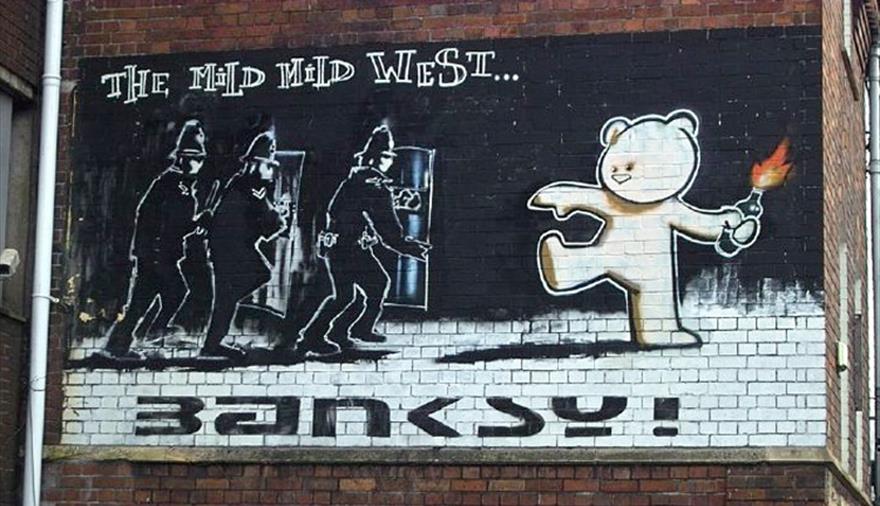 Banksy is now a world-famous artist, whose work has sold for hundreds of thousands of pounds. But once, he was just another kid on the streets of Bristol with a can of spray paint in his hands. As a result, some of his earliest work is hidden around the city, and spotting it is an absolute must for fans of his work.

Born in Bristol in 1974, Banksy was involved in the wave of street art that took Bristol by storm in the 1980s. Throughout the following decades, his work has cropped up in London, LA and New York, and of course, in his home town of Bristol. In 2009, Banksy held a spectacular homecoming, when under complete confidentiality, he overtook Bristol Museum and Art Gallery for an exhibition that saw crowds queueing for hours on end for a glimpse of his work. Then in 2015, Banksy came back to the West Country for his internationally successful Dismaland exhibition in nearby Weston-super-Mare.

There have been lots of Banksy's work appear in the city in the past, but sadly many of these are no longer here to view, including Click Clack Boom, Mobile Lovers and, most recently, Aachoo!!.

See it for yourself

We've listed some of Banksy's most famous Bristol works, which together make for a great self-guided walking tour of the city. With plenty of stops to sample some of the bars, cafés and restaurants the city has to offer, it's a day of culture, Bristol fashion.

Banksy confirmed this mural on Marsh Lane in Barton Hill was his on Valentine's Day 2020. Close to the youth club where Banksy spend some of his time as a younger man. It shows a girl firing a catapult full of red flowers onto the side of a house.

One of the most infamous of Banksy's works was originally painted on the side of the Thekla Social boat moored in Bristol harbour. the decision was taken in August 2014 to remove the work to protect it from damage and wear and it is now on display in Bristol's M Shed (on long term long)

Central Bristol: The Girl with the Pierced Eardrum

From the M Shed, head along the Harbourside, admiring some of the best views of Bristol, Brunel's SS Great Britain, Aardman headquarters and looking over to see the coloured houses of Cliftonwood. The newest of Banksy's Bristol works, this first appeared on the side of a building in Albion Docks in Hanover Place, in Bristol's Harbourside in October 2014. You can find it near to Bristol Marina, look out for the clock tower and the nearby burger van.

Central Bristol: You dont need planning permission to build castles in the sky

From the Harbourside head towards Bristol Cathedral, there is a small road here behind the Central Library called Lower Lamb Street, at the end of this road tucked away is a Banksy mural painted in 2011, of the quote 'you don't need planning permission to build castles in the sky'

Next, head towards College Green and Park Street, one of Bristol’s most famous streets. Banksy's Frogmore Street artwork is actually on the side of a sexual health clinic, with the best views being had from the small bridge at the bottom of Park Street that crosses Frogmore Street. From here, head up the hill, browsing the great selection of trendy clothing shops,gift stores and quirky fashion shops on the way.

Head up to the top of Park Street and cross over to the right-hand side. Next door to the tower of Bristol University's Wills Memorial Building is the entrance to the Bristol Museum and Art Gallery, here you will be able to see Banksy's Paint-Pot Angel, which is a reminder of the hugely successful 'Banksy versus Bristol' Museum exhibition held in 2009.

Head to the heart of Bristol’s cultural quarter, Stokes Croft. Banksy’s Mild Mild West artwork is located next to The Canteen and the best views are from the Jamaica Street Junction. The whole area resembles an outdoor gallery with colourful graffiti that continually transforms its walls and buildings, and is a must for street-art fans.

Take the Money and Run, near Montpelier Health Centre

A short bus or car ride from Stokes Croft is Easton. This area is slightly further out of the way but contains some of Banksy's oldest works and is a mecca for street-art fans. On Foster Street, you'll find another very early Banksy that again is set within a collection of fantastic street-art. It's well worth a visit just to take in some of the other amazing work that lines the streets there.

Read more about Banksy in Bristol

How to have a Banksy-themed weekend

Banksy and other street art hotspots

Learn more about Bristol street art and other walking tours around Bristol.

Things to do in Bristol

Take me to the Visit Bristol homepage 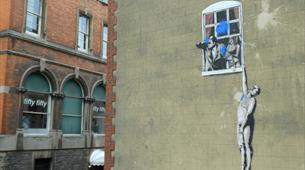 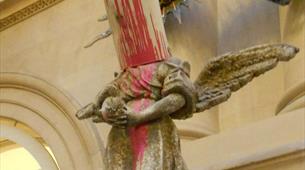 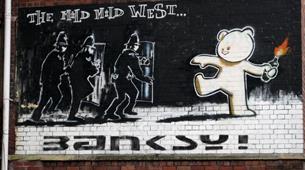 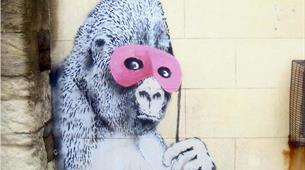 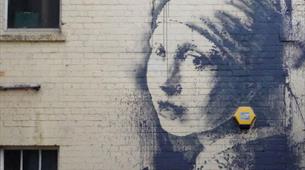 Banksy Graffiti The Girl with the Pierced Eardrum, Harbourside 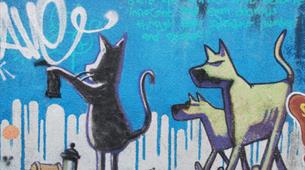 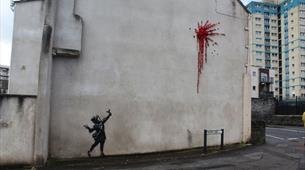 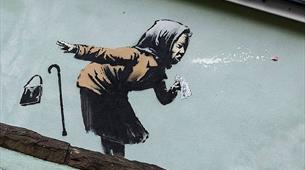