You are here: Home > Things To Do > Pero's Bridge 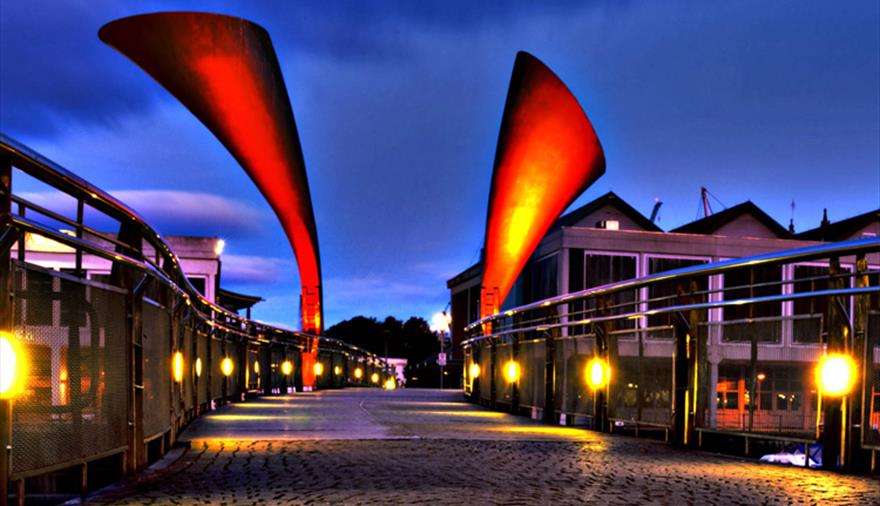 Pero's Bridge is a pedestrian footbridge that spans Bristol's floating harbour, and was named in honour of Pero Jones, who came to live in Bristol as the slave of John Pinney.

The bridge was designed by the Irish artist Eilis O'Connell, in conjunction with Ove Arup & Partners engineers and opened in 1999. Composed of three spans, the outer two are fixed and the central section can be raised to allow tall boats to pass along the floating harbour. The most distinctive features of the bridge are the pair of horn-shaped sculptures which act as counterweights for the lifting section.

The Bridge is named after Pero Jones, born into enslavement in the West Indies and of African descent,  who came to live in Bristol. In 1765, at the age of just 12, Pero Jones was bought by wealthy slave plantation owner and sugar merchant, John Pinney, to work on his Mountravers plantation in Nevis. In 1784 he accompanied the Pinney family in their move from Nevis to Bristol, where they lived in the Georgian House. Pero was personal servant to John Pinney and served for 32 years. The bridge was named in commemoration of one slave who lived and died in the city.

Now, Pero's Bridge is a popular meeting point and an integral part of the Harbourside, linking the bars, restaurants and attractions that surround Millennium Square, including the Bristol Aquarium and We The Curious, to the cobbles and leafy sanctuary of the Old City, home to the comtemporary arts centre Arnolfini and the tranquil Queen Square.