You are here: Home > Things To Do > Queen Square 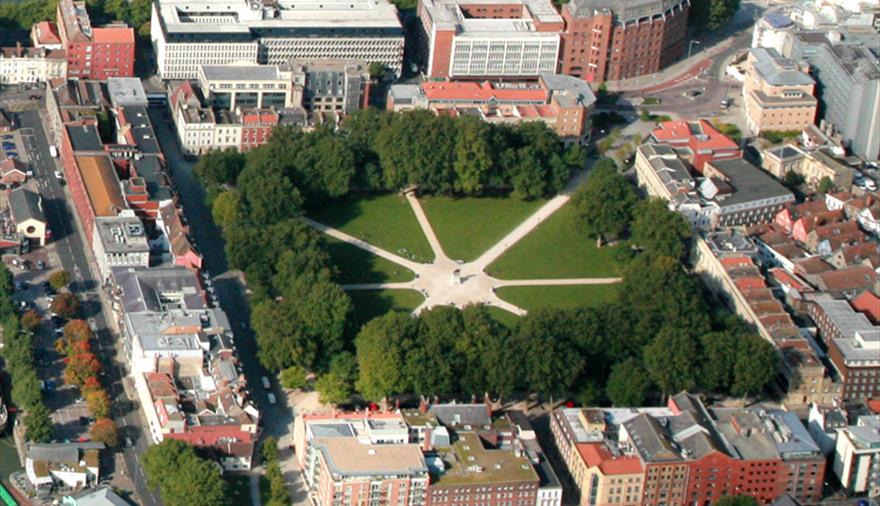 Queen Square is a magnificent Georgian park area in the heart of Bristol, surrounded by trees and cobbled streets.

Nestled amongst Bristol's Harbourside and Old City areas, Queen Square is a popular retreat for nearby workers and visitors to the city who are looking to relax. The square also regularly hosts outdoor theatre, concerts and other major events, all against the backdrop of the magnificent Georgian town houses that dominate views across the square.

Until the beginning of the 17th century, the area on which Queen Square now stands was marshland that had been used as the city’s rubbish dump and for weaponry practice. In 1622, it was remodelled as a tree lined promenade and a place to play bowls.

The first house was built on the south side of the square in 1699 and in 1700, the square was laid out in its present form, and named after Queen Anne in 1702. Rysbrack’s statue of William III, which stands in the centre of the Square, was erected in 1736. Gas lights were introduced to the square in 1819.

Queen Square and The Bristol Riots

When Bristol was swept by violent riots on 30 October 1831 (sparked when the House of Lords blocked a popular electoral Reform Bill), nearly 100 of the buildings in and around the square, including the mayoral Mansion House, Bishops Palace and Custom House, were burned to the ground and their cellars looted.

Hundreds of protesters died in the riots, almost 90 were sent to prison and four were hanged. The nation was scandalised. Rebuilding took place over the next 80 years.