You are here: Home > What's On > Bristol Craft Beer Festival

Bristol Craft Beer Festival returns from 12 – 13 June for its fifth year, promising another spectacular weekend of fantastic beer, incredible food, live music and the best vibes anywhere in the city!

The event will be a carnival of craft beer, with international and national brewing icons pouring special and one-off brews, DJs and food stalls.

Bristol’s brewing massive is represented by the likes of Bristol Beer Factory, Arbor, Good Chemistry, Left Handed Giant, Lost & Grounded, New Bristol, Wild Beer, Moor and Wiper and True. Over the years Bristol Craft Beer Festival has garnered a reputation as a truly international event, bringing some of the world’s best breweries to the city… and 2020 will do just that.

More breweries are still to be announced, but if the promise of all this incredible beer isn’t quite enough of a treat then Bristol Craft Beer Festival also comes with a mouth-watering line-up of Bristol street food featuring Murray Mays, Two Belly, Asado and Eatchu.

Tickets:
£49.50 + booking fee
Your ticket includes:
Entry to the event for five hours,
Festival pours of any beer from any brewer,
A full music line up,
Access to the people that make the beer themselves,
Free beer tasting glass and a programme

Find out more about beer & breweries in Bristol 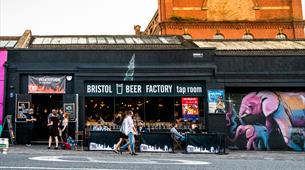